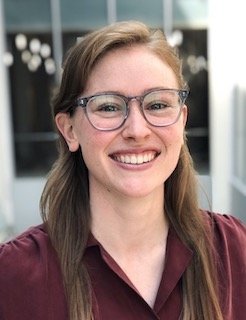 Emily hails from Southern California, but has happily called New England home for almost a decade despite being the sole Lakers fan in a 300-mile radius. She came east for college at Harvard where she studied Human Evolutionary Biology and English, played a lot of basketball, and worked several jobs. After graduating in 2017 she did an AmeriCorps education program, teaching ELA and running afterschool programs at an elementary school in Seattle. She found a passion for education equity work that combined perfectly with her interest in serving kids and underserved populations. Then fate brought Emily back to the east coast for medical school at Brown where she was involved in First-Gen/Low-Income peer mentorship, leading and coordinating pre-orientation hiking trips for incoming M1s, and researching ethics pedagogy in medical education. She also volunteered in preschools and at a local Boys & Girls Club as a youth basketball coach, and spent a lot of time perfecting her carrot cake recipe.

Brown’s support for maintaining the whole self during medical training, its opportunities to advocate for reproductive justice and early literacy, and emphasis on family-centered care are just a few reasons it has felt like a perfect fit for Emily. She fell in love with Rhode Island’s amazing food, breweries, people, and community during medical school and is so excited to continue her journey to becoming a pediatrician here alongside these amazing folks!