Pediatric Acute Respiratory Distress Syndrome is a disease process of severe hypoxemia with oxygenation and (often) ventilation failure, with lung inflammation and poor lung compliance (see Pathophysiology below). It is similar to the adult counterpart (ARDS) but carries slightly different definitions. PARDS is an important cause of morbidity and mortality in the pediatric ICU, and awareness of degree of hypoxia is key, especially in patients who have not yet developed ventilatory failure.

The incidence of Acute Respiratory Distress Syndrome in the pediatric population is much less than in adults, but carries a 18-27% risk of mortality for children. Reported incidence in the US, Europe, Australia, and New Zealand is 2-12 per 100,000 person-years. The inciting factor can be direct lung injury/infection or can also be injury/infection elsewhere in the body, starting an inflammatory cascade. Pneumonia, sepsis, aspiration, and trauma account for the majority of etiologies of ARDS for both adults and pediatrics, but it is important to remember that viral pneumonia and viral sepsis are etiologies as much as bacterial processes (especially as we consider the viral illness burden in pediatrics). Drowning is also a key etiology in pediatrics. Some studies report that preexisting illness is more prevalent among pediatric patients with ARDS than in adults.

Acute Respiratory Distress Syndrome has long been acknowledged as a well understood pathophysiologic process in critical care… at least in adults (in fact, it used to be called Adult Respiratory Distress Syndrome until pediatric intensivists made enough of a fuss!). Although strict diagnostic criteria stratifying prognosis and treatment strategies have existed for the adult population, these criteria were only extrapolated to pediatric populations without specific guidelines made for pediatric patients relatively recently. In fact, on literature review at the time of this writing there were only articles dedicated to adult ARDS on the comprehensive website utilized by many residents – UpToDate. The Pediatric Acute Lung Injury Consensus Conference (PALICC) created recommendations in 2015 that were finally specific to Pediatric Acute Respiratory Distress Syndrome (PARDS) and recommended that further studies be conducted to look into pathophysiology as it related to pediatric specific population (many of which are ongoing). This development was helpful for the management and diagnosis of ARDS in pediatric patients especially given the differences in pediatric lung physiology as well as etiologies.

The PALICC definition creates a specific pediatric population that excludes patients with perinatal lung disease (ex. Bronchopulmonary Dysplasia, RDS, etc.) since these patients are more difficult to manage in the acute setting owing to their chronic lung disorders and may have ventilation needs at baseline. PARDS was then defined as the following:

Interestingly, the definition does not include a measurement of compliance of the lung, despite this being a characteristic of the disease process’ pathophysiology. Instead, PALICC gave treatment guidelines for PARDS with and without poor compliance, acknowledging that in pediatric patients compliance changes may or may not be present.

An additional benefit to the PALICC guidelines was the improvement of pediatric specific stratification of severity. Prior definitions (AECC, 1994) utilized PF ratio as a definition criteria in adults and classified Acute Lung Injury and Acute Respiratory Distress while Berlin, 2012 removed Acute Lung Injury and began to stratify severity within ARDS itself, again using P/F ratios but adding the consideration of PEEP because of its known effect on oxygenation. The addition of minimum PEEP allowed for the inclusion of patients on non-invasive mechanical ventilation. The PALICC guidelines utilize a different metric: Oxygenation Index (OI) or Oxygenation Saturation Index (OSI), which takes into consideration the Mean Airway Pressure, as opposed to PF ratio which depends only on arterial pO2 and FiO2. Importantly, studies demonstrated that OI and OSI were equally able to accurately stratify patients’ severity. This benefits pediatric patients greatly because OSI requires only transcutaneous pulse oximetry and saves patients from arterial blood draws. This new metric was recommended by PALICC for patients receiving invasive mechanical ventilation, but recommended continued use of P/F or S/F ratio calculation for patients with noninvasive mechanical ventilation. The table of PALICC criteria is below: 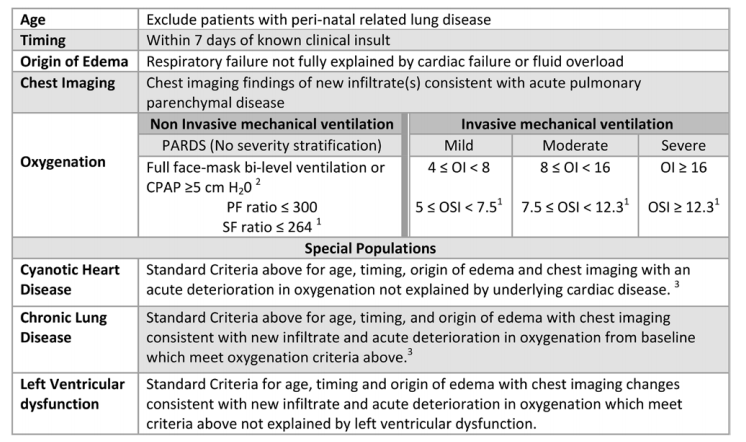 Calculations for OI and OSI are as follows (with the OSI and OI ranges more easily referenced below):

The progression of diagnostic criteria to include patients on non-invasive ventilation (CPAP, BiPAP, HFNC) as well as utilizing saturations instead of just PaO2 measurements has allowed for earlier recognition and treatment of pediatric patients. Initial 1994 AECC definition utilized pulmonary arterial wedge pressures (luckily no one really gets a Swan-Ganz catheter anymore!), which Berlin definition removed in 2012 in favor of arterial blood gas monitoring for diagnosis and severity stratification. PALICC went further with the above described use of OSI and S/F ratios as described. The table below outlines evaluating patients who may be at risk of PARDS: 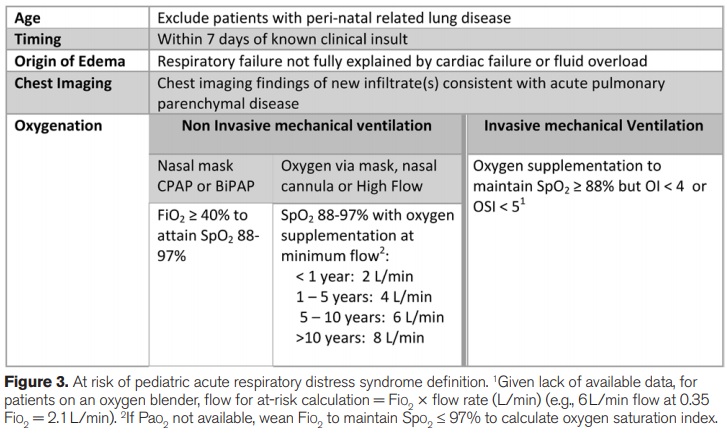 This is a great opportunity to recognize that if a patient is requiring more than 40% FiO2 to get sats >88%, either they may need more support, are sicker than you realize, have underlying lung/cardiac disease, or the prongs aren’t in their nose! It’s also a great argument for weaning FiO2 – don’t just leave the patient satting 100% on 60% FiO2; wean the FiO2 to sats of 97% or less to see how much you really need so you can have a sense of the degree of hypoxia/illness severity.

Treatment for both adult and pediatric ARDS is similar and begins initially with treatment of underlying infection, sepsis, or necrosis. There are only a few evidence-proven treatment strategies for PARDS, especially given the lower prevalence in pediatrics. However, the hierarchy of interventions usually follows as such:

It would make sense to think about giving surfactant like we give in neonates, but there have been no positive trials with surfactant delivery in PARDS. Overall, this is a hard disease process to treat, but success is increased with early recognition and situational awareness of significant hypoxia.